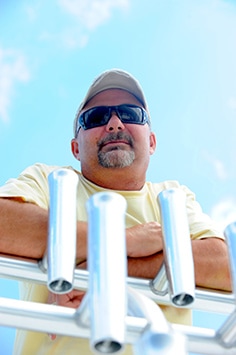 Fishing Captain George Pfeiffer was born and raised in the beautiful Florida panhandle city of Pensacola. He has lived on the water his entire life, working for his father who was in the boat business from 1954 until 2004 when he passed away.

Captain George started fishing off his own dock on the emerald coast when he could barely hold a fishing pole. Since then, he has fished all of northwest Florida, south Alabama and the Alabama Gulf Coast, as well as the Mississippi Delta. He has fished every setting from the rivers, to the back-bays, to the beautiful blue offshore waters in the Gulf of Mexico. While still employed with his father in the boat business, Captain George fished commercially for Red Snapper from Panama City and Destin, Florida to the Texas gulf coast.

From gigantic Yellow Fin Tuna off South Pass, Louisiana, to fishing for Cobia, to trolling for the majestic Blue Marlin in the DeSoto Canyon, Captain George has over 30 years of experience fishing offshore and he knows where the big ones live. Captain George has been building his own fishing reefs for over 20 years, so he has plenty of red hot fishing holes waiting to be fished. Captain George, The CAT and The Emerald Spirit participate in all local Fishing Tournaments.

Captain George has held a US Coast Guard license for over 40 years. All you need to do is mention Captain George around any marina or tackle shop, and you will find that he is one of the most respected captains on the Gulf Coast who can put you on the fish.