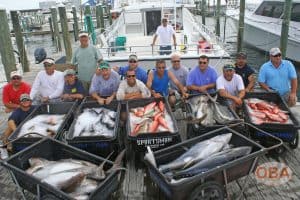 Once again we are riding the Emerald Spirit out for a day of fishing in the beautiful Gulf of Mexico. We had 10 hours to get it done in the same fashion we usually have 12. The first stop was on the rocks offshore for some Vermillion Snapper and white Snapper with the chance of getting some other good bait fish with them. The first place I stopped was on fire. We caught real nice Mingos and whites one and two at a time. Before you knew it we had limited out for the Vermillion Snapper at 10 per person. After that we decided to go a little deeper and try some Amberjacks and maybe a Scamp or two. I traveled about 3 or 4 miles, just enough time to let everybody get something to drink and let the deck hands regroup for the jacks with heavier tackle. We arrived to the hole and prepared to drop four lines at a time. You are allowed to keep one fish per person so with seven anglers I figured it wouldn’t be long for each person to tag out and pass the rod off to the next guy. Boy do I love it when a plan comes together. We dropped four baits and immediately were on with four big Jacks. We tagged out with the rods to the next anglers as the fish came in and in no time we were done, limited out.

They brought up Yellow-edge Grouper, Snowy Grouper, Scamp and to my huge surprise some of the most Monster-size Mingos we’ve ever caught. No kidding. They were 5-6 pounds a piece.

So I told them to grab the two hook bottom rigs and drop them for some Scamp right there on the same spot. Sure enough we caught a few but it wasn’t what I knew we could do so we moved to our third hole of the day which was even deeper than the last, now we are in 290 – 310 feet of water.  As I rode down to the next spot I was remembering the last time we fished there last season and it dawned on me that we caught some deep water Grouper there. I told the deck hands to get ready for some of those and we’ll try it. When we got there every one was baited up and ready to drop. You have to be ready to drop when I tell you, especially in the deeper water like this because it’s sort of like precision bombing, everybody has to go down at the same time to avoid tangles and to assure you hit the target. We dropped and it didn’t take long to see we hit the target good. Everyone got fish on and I knew we made the right decision. They brought up Yellow-edge Grouper, Snowy Grouper, Scamp and to my huge surprise some of the most Monster-size Mingos we’ve ever caught. No kidding. They were 5-6 pounds a piece. It was a good thing the deck hands used up some of the other b-liners we had for live bait earlier because I would have died to have to throw those back. That’s when I realized it was time to go home. Three stops and we put the mash down on them. It doesn’t get any better. I can’t wait till next week when we go on our first overnight Tuna trip. The reports are great offshore and there are plenty of nice fish, we’ll check it out.