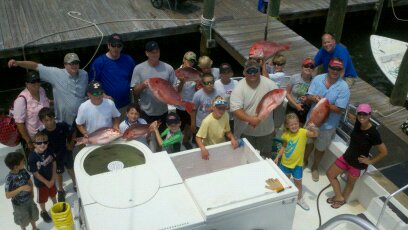 It’s Saturday and we got one of our favorite customers on board for a 12 hour trip of deep water offshore fun. The best part about this trip is that all off the people on the boat are in some way involved with the restaurant business. My friend Marco makes this thing called a “Frittata”. It is delicious! It’s is like a giant omelet with sausage, mushrooms, cheese, potatoes and I don’t know what all else all mixed in a scrambled egg deep dish pan. Awesome!

I know what’s for lunch when they come. As usual, we went out Saturday and started with catching our Mingo’s, Triggers and stuff and moved offshore for some Amberjacks. As we went out farther the current got pretty strong on a few holes we stopped on and I heard some of the other captain’s complaining about how hard it was to hold up on the spot. I started to fear the worst for fishing in the deeper water we were headed for, however I noticed a huge tide line on the horizon a mile or so out in front of me and figured I was going to stop just beyond the line.

To my surprise we passed over the line about 500 yards and rounded up on the hole and I darn near ran slam off of the hole thinking it was like it was on the last hole. Thank goodness it was dead still. Cool! What a relief, I won’t have to fight the current or massive tangles in the deep water. After checking the spot we stopped on and catching some big Mingo’s and several huge Triggerfish we went on out for some Amberjacks.

I wish I could say they just jumped in the boat but that isn’t what happened. We had to work for them. Maybe that current wasn’t moving on top but something had them spooked a little. We caught a few here and there and ended up hitting one really good hole by luck in the end. I know you’re thinking, “He was saving that one till last” but I wasn’t. I’d rather be lucky than good on a day like that. All’s well that ends well. We had a great trip when it was over; I just had to work a little harder.